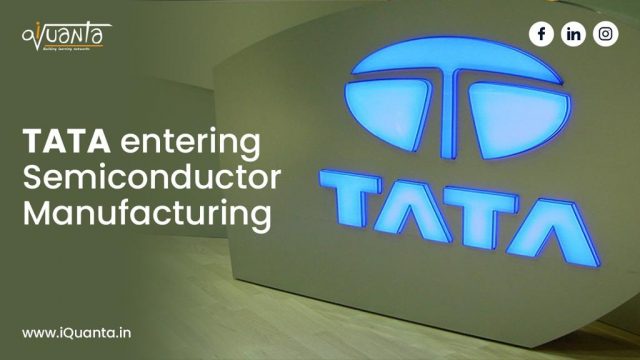 TATA group is planning to enter semiconductor manufacturing, the market for which is pegged at $1 trillion.

This move comes after they enter into the 5G telecom equipment manufacturing space by acquiring a majority stake in the Tejas network. They will compete against global makers like Samsung, Ericsson, Nokia, Huawei.

The global supply chain in the semiconductor business is highly dependent on China and the post-pandemic times will see a geopolitical shift to other countries. Hence, this seems to be a great opportunity for the Tata group.

Semiconductors are used everywhere now like computers, phones, tablets, and other electronic equipment. Cars use them in their fuel-pressure sensors and digital speedometers.

When the global chip shortage hit due to the pandemic, Tata was directly affected. Tata Motors posted major losses in the June quarter since volumes were down. Already demand was low but there were high supply issues which led to huge losses.

This is why it seems they’ve decided to take things into their own hands. Also, many countries are dependent on China and reliance on one country is not the right strategy.

Further, it can be seen that manufacturing chips is the new obsession of not only Tata but also the government.

The government has been offering more than $1 billion in cash as major incentives to existing chip manufacturers to start manufacturing here. The government wants to strengthen its electronics supply chain by encouraging firms to set up chip fabrication units.

Chips made locally will be designated as “trusted sources” and can be used in products ranging from CCTV cameras to 5G equipment.

The main issue with setting up in-house chip manufacturing is that it requires a major upfront investment.

The government estimates it would cost roughly $5-$7 billion to set up a chip fabrication unit in India and take 2-3 years after all the approvals are in place.

However, as per Bloomberg, setting up a new-age chip fabrication facility can cost more than $20 billion upfront, rising to more than $40 billion over 10 years.

Presently, India does not have anything close to such a facility yet. Hence, just providing cash incentives won’t work. We need a lot of other infrastructures (like a stable supply of power) to make this work.

Tata did not elaborate on the exact plan in terms of timeline. However, their plan will create employment along with huge opportunities for exports.