Is a world without the Amazon Rainforest worth living in? 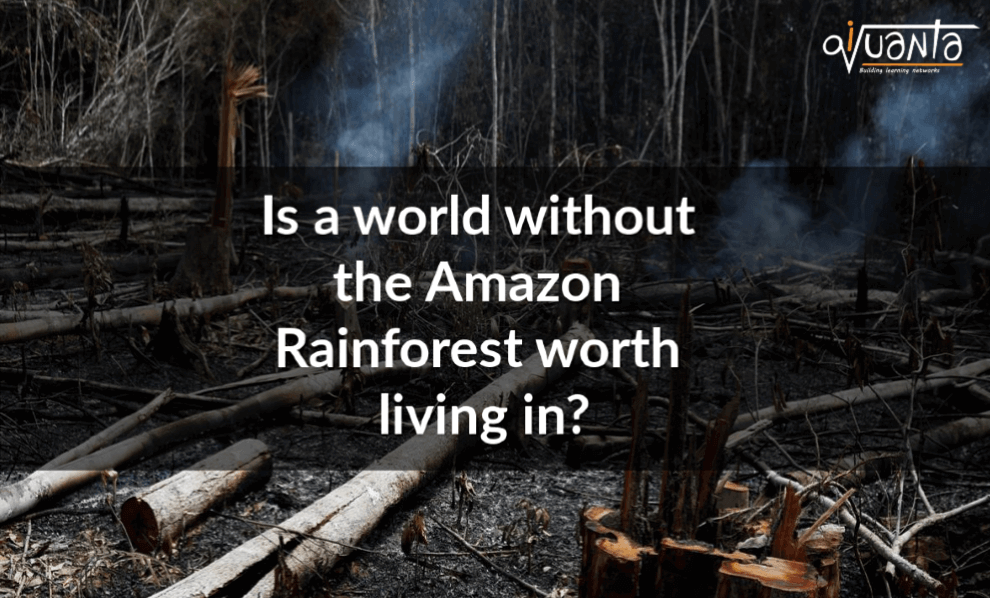 The Amazon Rainforest is the big daddy of all rainforests. It covers approximately 40% of the South American continent that straddles parts of Bolivia, Columbia, Ecuador, French Guiana, Guyana, Peru, Surinam, Venezuela and of course Brazil! This rainforest is home to 2.5 million different species of insects, 40,000+ varieties of plants, 16000 species of trees, 1500 bird species, 2000 fish species, 427 mammals, 430 amphibian species and 380 reptile species which have been classified just within the region and of course the home of 3.1 million humans! It is spread over an area of 5.5 million sq km. An important fact to note here is that, The Amazon rainforest covers over half of the world’s remaining rainforest. Only 6% of the earth’s surface is covered by the rainforest and out of this, the Amazon rainforest covers over half of the world’s remaining rainforests. Apart from the above notable dependencies living organisms have on Amazon, The Amazon trees and plants provide more than 20% of the world’s oxygen and A quarter of the western medicine pharmaceuticals used today has rainforest based ingredients that originate from the Amazon rainforest. Then why are we hell-bent on destroying this massive reservoir, which serves as heaven on earth?

Why is the Amazon Rainforest suddenly all over the news?

First and foremost, this is not the first time that the rainforest has caught people’s attention. It is just that, we have adversely pushed its condition to such a state that it is imperative that Amazon Rainforest be part of our conversations.
Earlier this month, Brazil declared a state of emergency over the rising number of fires in the region. So far this year, almost 73,000 fires have been detected by Brazil’s space research center, INPE. That marks an 83% increase from 2018 and the highest number on record since 2013, according to Reuters.
While, climate change is a big factor to these fires, fire is often used to clear out the land for farming or ranching, for that reason, a vast majority of the fires can be attributed to humans. The Amazon is referred to as the “lungs of the planet” and plays a major role in regulating the climate. The world would drastically change if the rainforest were to disappear, impacting everything from farms to drinking water.

• What will happen, if the rainforest is completely washed out?
Let’s break this answer in 3 categories

What will come in place of the rainforest?

What can you do?

o Reduce your paper and wood consumption
o Reduce your beef intake. Beef found in processed products and fast-food burgers often comes from the rainforest
o Educate your family and friends about the importance of the Amazon
o Reduce your use of fossil fuels, and your impact on the planet
o Invest in rainforest communities – Donate to Rainforest Action Network, Rainforest Trust and One Tree Planted

Be your planet’s Captain America!

Oyo Backing by Microsoft The hotel industry was one of the highly...
GD-PI

Prosus to buy BillDesk for $4.7 billion

Prosus is a Dutch consumer Internet conglomerate which owns the financial...
Load more