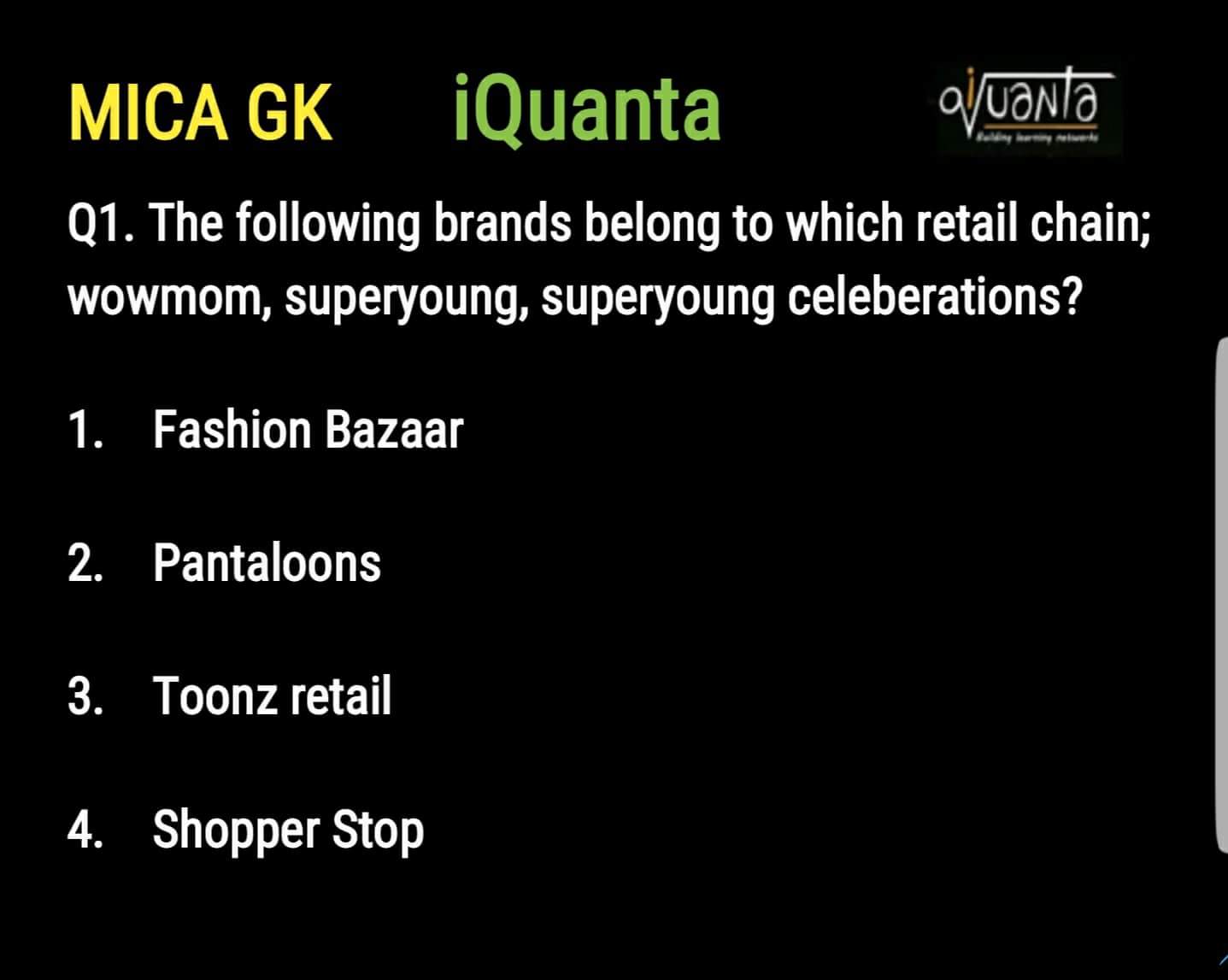 Q5. ‘The Wedding Store’, a one stop shop for all the wedding needs is launched by which of the following ventures?
1. Flipkart
2. Shaadi.com
3. Matrimony.com
4. Shopclues.com
OA: ‘The Wedding Store’ at ShopClues helps you shop for all the occasions associated with your wedding. So be it your Sangeet ceremony or Bachelorette party, ShopClues has on offer the best of everything from the perfect trousseau to the most irresistible accessories.

Q6. Name the CEO of these AD Agencies

Pandey joined McAleer and Keenor’s company in 1982, and in 1989 he moved to the creative department at O&M. Three years later, he was promoted to creative director, and then to national creative director. Pandey was nominated to the board of directors in 1995, and in 2004 was appointed executive chairman for Ogilvy India and South Asia. He later became vice-chairman of Ogilvy Asia-Pacific. During his tenure Ogilvy & Mather became the third-largest advertising agency in India, and Ogilvy India is considered one of the most creative offices in the Ogilvy network. In September 2006, Pandey was nominated to the Ogilvy worldwide board. He mentors creative executives from around the world at the Berlin School of Creative Leadership.

Q7. What is the newest feature in PayTm that allows you to locate the nearest PayTm store?
1. Nearby
2. PayTm Locator
3. Store Finder
4. PayTm Point
OA: Paytm ‘Nearby’ will carry a directory of 800,000 of Paytm’s offline merchants and partners across India. Customers on their Paytm app or web can now browse through a list of shops & locations near them that offer services like accepting Paytm, adding cash to Paytm wallet & upgrading accounts by doing KYC. This not only provides convenience to customers but also provides visibility to thousands of small and medium merchants by connecting them to millions of Paytm customers.

Q10. Ola built its new hardware platform ‘Ola Play’ in partnership with which of the following companies?
1. Qualcomm
2. IBM
3. Microsoft
4. Sony
OA: In a global first, Ola, India’s most popular mobile app for transportation has launched ‘Ola Play’, a connected car platform for ride sharing that will transform the in-car experience for users on the go like never before. Ola Play is powered by proprietary in-car and cloud technologies from Ola, by bringing advance car controls, choice of personalized content and a fully connected interactive experience for the user. The platform hardware is a first of its kind solution built by Ola in partnership with Qualcomm.

Q16. Twitter has launched a new product which allows banks to provide customer care on their profile with a message button, allowing customers to send message to the business. Recently, a bank partnered with Twitter to launch this feature on their twitter profile. Which bank was it?
1. Kotak Mahindra
2. Yes Bank
3. Standard Chartered
4. ICICI Bank
OA: Twitter and ICICI Bank, announced a partnership that integrates a slew of digital customer care support features for ICICI Bank, benefiting millions of its customers with direct online response to their queries and feedback in real-time.

Pro tip: Remember the logo of these brands too.

Q19. Questions on Mergers and Accquistions
1. Paytm accquired Nearbuy and Little to merge the two apps.
2. Indian e-commerce giant Flipkart acquired the Indian wing of eBay, which infused $500 million into Flipkart as well as sold its Indian operations unit for an exchange of equity stake in Flipkart. As Flipkart doesn’t have the global presence, the acquisition will bolster the cross border trade and help Flipkart to combat Amazon’s onslaught.
3. Axis Bank is one of the few tech savvy banks in India. It has been embracing technology to ease the banking. It acquired Accelyst Solutions Private Limited and Freecharge Payment Technologies Private Limited for $60 million. The acquisition will pave a way for its foray into proliferating digital payments space in the country.
4. Airtel which is under immense pressure due to losing customers and falling revenues is trying hard to regain its lost ground. The merger with Telenor India will give initial thrust to the company in the fight against Reliance Jio and Vodafone-Idea. Airtel is buying Telenor India’s operations in Andhra Pradesh, Bihar, Maharashtra, Gujarat, UP (East), UP (West) and Assam circles, which contribute about 35% to Airtel’s total revenue.
5. Based in Bangalore, Halli Labs develops solutions to traditional problems using Artificial Intelligence (AI), Machine Learning (ML), and deep learning technologies. Google acquiredthis 4-month old startup with its CEO becoming Director of Engineering.
6. Idea Vodafone Merger
7. Bharti Airtel, India’s top telco and Tata entered into an agreement to merge Consumer Mobile Businesses (CMB) of TTSL and TTML into the Sunil Mittal-led telco. As part of the agreement, Airtel will absorb Tata consumer mobile business operations across the country in nineteen circles — 17 under TTSL and 2 under TTML.

Previous articleStory of Biswanath, converted IIM Bangalore as a Fresher: Busting the Myth
Next articleWhy MBA? A Layman’s Guide To The Most Decisive Question