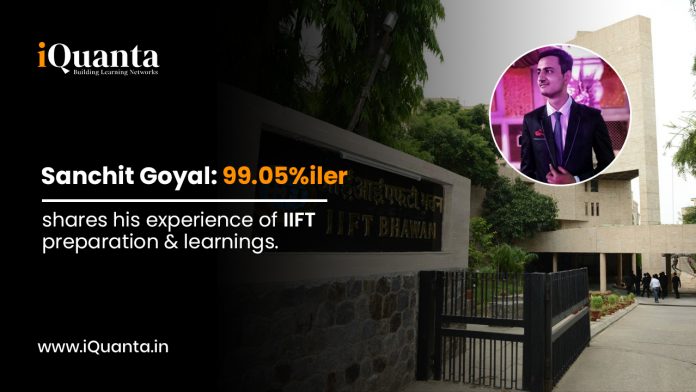 My Experience of IIFT exam

The preparation for all MBA exams is on similar lines. There are some differences in paper format which need to be taken care of. IIFT has six sections compared to three in CAT. However, this exam is comparatively more straightforward. The only thing that troubles me is General Awareness, as a sectional cutoff must be cleared for all sections to get a call. Hence, efforts to prepare this section has to be put in. Although the cutoff is usually relatively low, clearing that is also not a piece of cake. This is because of the negative marking, and most questions have to be attempted; otherwise, marks are cut for left questions. Hence, the marking scheme is different in this exam, and we have to strategize according to that.

I was able to secure a 99+ percentile in IIFT. I could have scored more easily but made some minor mistakes while solving the reading comprehension section. The sections which were difficult for me were Verbal Ability and General Awareness. Apart from that, I was pretty confident in other sections. The thing that matters the most in this exam is speed because the number of questions is more. Accuracy also matters, but issues of speed more as maximum questions have to be attempted; otherwise, there is negative marking for unanswered questions after a specific limit.

I got a call from IIFT but could not crack the WAT-GD-PI round. My WAT and GD went great, but I did not perform well in PI. Most questions they asked me were about current affairs, and in fact, they deep dived into that for which I was not prepared. I had a good experience because this was the first time I performed very well in GD and got the confidence for my future GD rounds. Since, during the PI, I was grilled on current affairs, so I knew that I had to work on that before my following interview.

As far as preparation is concerned, I had one week’s time after my CAT exam. Hence, I focused mostly on giving mocks and reading for the General Awareness section. Since I had subscribed to the material of TIME, I was getting monthly GK magazines which I tried reading. Also, I practised previous years General Awareness section to know what kind of questions are asked. Since this section does not have negative marking, I had to answer a few questions correctly to clear the sectional cutoff. Apart from preparing separately for this section, I focused on giving mocks and solving previous years questions. Since speed is of utmost importance for this paper, I practised solving under a time limit.

Once I got a call from IIFT, I enrolled in the GD-PI batch of TIME institute. That helped me shape my preparation, and I was getting enough practice through mock GD and PIs. Also, I started reading the newspaper daily to stay updated with current affairs. Mostly we have to be updated with the latest happenings and significant happenings in the last two years. They asked me in my interview about the top exports and imports of India, Anil Ambani case, Jet Airways case etc. They were looking for numbers in that. Hence, one has to read the newspaper thoroughly.

What went wrong for me

Since I was not able to convert the WAT-GD-PI round, I think that this is because I was not prepared that much for my interview. I was majorly grilled on current happenings, and I had not deep-dived enough in the news articles. The interviewers were expecting numbers from my side, which I couldn’t remember. Also, I didn’t go through the newspaper for the last two days due to travelling, which affected my interview. Further, my interview was the last, and I was in a hurry to finish the interview that the interviewers could sense. Lastly, some questions were asked about my academics also, and they were looking for answers to how technology can help in the business world, for which I couldn’t give a satisfying answer. Also, when asked about my weaknesses, I also said punctuality but could not justify the answer. Hence, I made inevitable mistakes, but eventually, I learned a lot from this experience.

IIFT is one of the country’s top institutes, and to crack the exam along with the GD-PI round is not an easy task. It requires brilliant work and dedication. Some things to keep in mind before and during the IIFT exam-