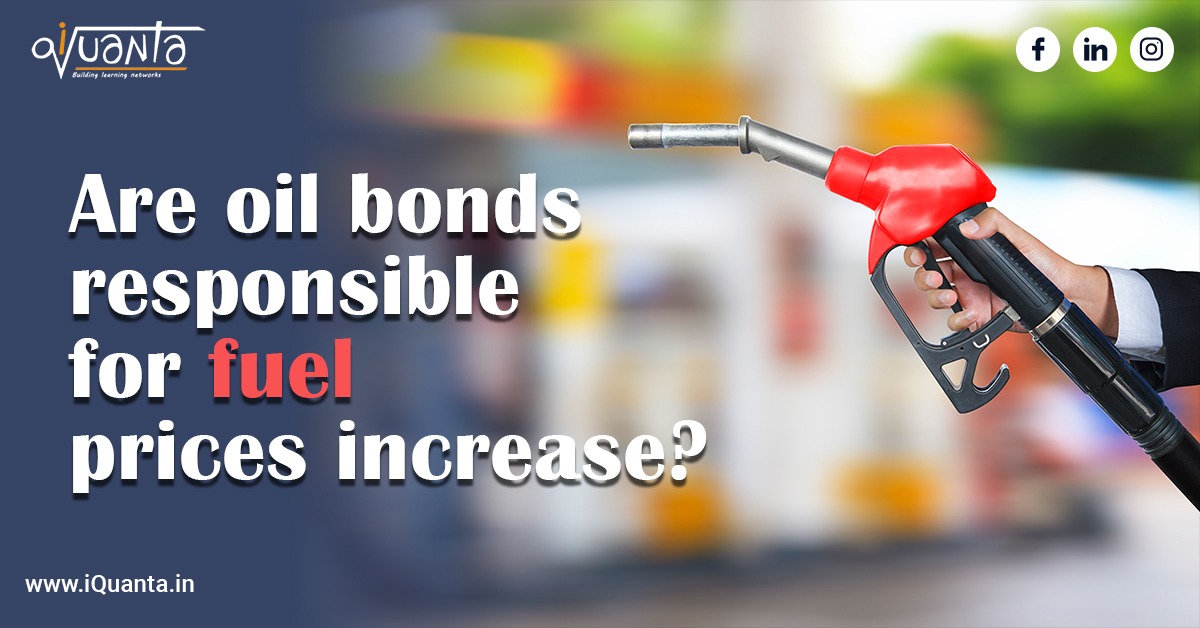 Bonds are basically used to raise money with a promise to repay the debt. They are standardized contracts and the terms and conditions associated with repayment can be replicated multiple times simply by issuing more bonds.

So whenever there is a need to borrow a large sum of money from many investors at the same time, bonds come into the picture.

Coming to Oil bonds, they are like regular bonds, only the use case is a bit different.

The story goes back to 2005, when the UPA government was trying to fix the price of oil in a bid to make fuel more accessible to the general public.

Now, prices can’t be fixed. It depends on market forces of demand and supply. It can be fixed either when buyers and sellers meet and bargain in an open forum or by subsidizing.

So the government subsidized the price of oil by setting aside a portion of their budget. They continued to do this till the point they realized that it is increasing costs.

At this point, they had two choices – either to let prices change as per demand and supply or go for Oil Bonds.

There are Oil Marketing companies like Hindustan Petroleum, Bharat Petroleum which do most of the selling. Earlier, the government would simply ask them to sell oil at a discounted price and promise to make up for the shortfall by paying them upfront.

However, in the case of oil bonds, instead of paying cash upfront, the government made a promise to settle the dues in the coming  15–20 years. This shifted the burden on oil marketing companies (OMCs) while alleviating the burden off of the government’s finances.

OMCs didn’t have much say here and so they had to oblige. Between 2005 and 2010 the government issued oil bonds to the tune of 1.4 lakh crores.

Meanwhile, the government was prompt with the interest payments, but the OMCs can see the principal after 2021 only.

The OMCs were also allowed to sell these bands elsewhere instead of holding them, if they wanted immediate relief. The principal was bound to be paid as the government would never have defaulted on its obligations thus raising the value of these bonds.

In fact, Hindustan Petroleum and Bharat Petroleum already sold large chunks of oil bonds in the open market and traded them for cash.

Now coming to current scenarios, the NDA government has repeatedly asserted that these bonds seem to be overbearing in nature. The Finance Minister said that the oil bonds were holding her back from cutting taxes on petrol and diesel which is also not entirely accurate.

The government has been paying close to 10,000 crores in yearly interest payments for sometime now. This year they’ll likely be paying 20,000 crores. They’ll have to keep paying large sums of money over the next few years.

In the current financial year, the government is expected to pay close to 8 lakh crores in settling interest payments alone for all kinds of borrowing. So it is difficult to argue that the 10,000 crore payment on oil bonds is something which is worrying the government.

The government has made 3.45 lakh crores from excise duty on petrol and diesel during the last financial year. That’s roughly 34 times the interest the government paid on oil bonds during the same period.

Hence, there are other reasons for not cutting taxes right now. GST collections have been subpar due to Covid, forcing the government to borrow beyond its means. The government was facing difficulty in selling its prized assets. So, they don’t have a lot of money to spare right now.

So, fuel prices are at a record high not because of oil bonds but due to multiple other factors.