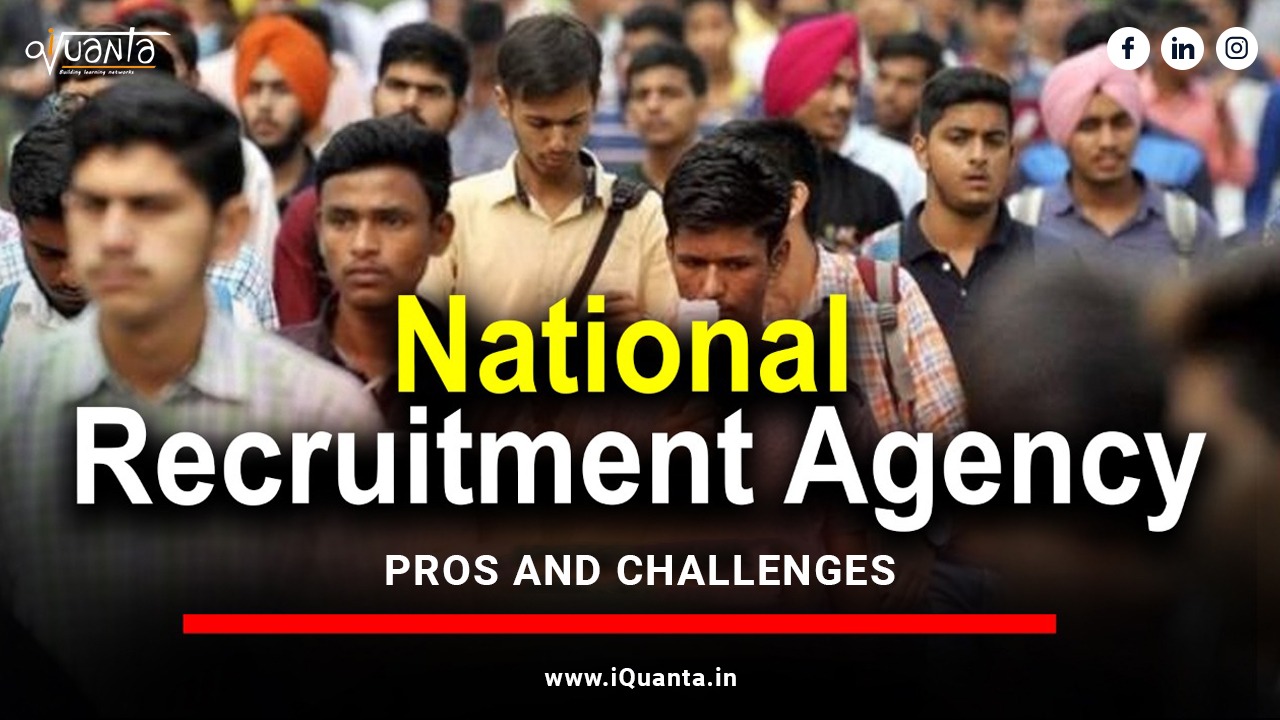 The Union Cabinet chaired by Prime Minister Narendra Modi has decided to set up a National Recruitment Agency (NRA). The proposed NRA will conduct a common preliminary examination for various recruitments in the central government. Dec, 2020.

Why is the NRA needed?

As of now, aspirants have to take different exams that are conducted by various agencies for central government jobs. According to C Chandramouli, Secretary, Department of Personnel and Training, on average 2.5 crore to 3 crore aspirants appear for about 1.25 lakh vacancies in the central government every year.

As and when it will be set up, the NRA will conduct a common eligibility test (CET), and based on the CET score a candidate can apply for a vacancy with the respective agency.

Will the NRA conduct a test for all government vacancies?

Initially, it will organize a CET to screen/shortlist candidates for the Group B and C (non -technical) posts, which are now being conducted by the Staff Selection Commission (SSC), Railways Recruitment Board (SSC), and Institute of Banking Personnel Selection (IBPS). Later on, more exams may be brought under it.

The agency will have representatives from SSC, IBPS, and RRB. The test will be conducted for three levels: graduate, higher secondary (12th pass), and the matriculate (10th pass) candidates. However, the present recruitment agencies– IBPS, RRB, and SCC — will remain in place. Based on the screening done at the CET score level, final selection for recruitment shall be made through separate specialized Tiers (II, III, etc.) of examination which shall be conducted by the respective recruitment agencies. The curriculum for CET would be common.

Each district to have an examination center (PRO)

To make it easier for candidates, examination centers would be set up in every district of the country. A special focus will be on creating examination infrastructure in the 117 ‘Aspirational Districts’. The government says that the move will benefit the poor candidates, as in the present system they have to appear in multiple examinations conducted by multiple agencies. They have to incur expenditure on examination fees, travel, boarding, lodging, and other things. The single examination is expected to reduce the financial burden on such candidates.

How long will the CET score be valid? (PRO)

The CET score of a candidate shall be valid for a period of three years from the date of declaration of the result. The best of the valid scores shall be deemed to be the current score of the candidate. While there will be no restriction on the number of attempts to be taken by a candidate to appear in the CET, it will be subject to the upper age limit. However, the relaxation in the upper age limit shall be given to candidates of SC/ST/OBC and other categories as per the extant policy of the Government.

What will be the medium of CET? (PRO)

Will it lead to speedy recruitment?

The government says that a single eligibility test would “significantly reduce” the recruitment cycle. Even some of the departments have indicated their intention to do away with any second-level test and go ahead with recruitment on the basis of CET scores, Physical Tests, and Medical examination, say sources.

How much money will be spent on the NRA?

Initially, the Union Cabinet has approved an amount of Rs 1517.57 crore for the NRA, for a period of 3 years. The money will be used for setting up of NRA, and examination centers in ‘aspirational districts’.

Unlike other government exams, CET can be attempted any number of times unless the candidate fulfills the eligibility criteria. So, ensure not to miss the chance of applying for the Common Eligibility Test 2021.

Yes, you read it right. Candidates can schedule their tests and choose their exam center whenever they wish to. Based on the availability of the exam center, candidates can take up the exam easily. Previously, the exam conducting authorities had to announce the exam date and it would get postponed due to various circumstances. But, now the process is very smooth and easier for candidates.

Save Time on Travelling

Instead of traveling to various regions when applied to more than one exam, you can just appear in one place for all exams. So, it is a big relief for all candidates who had to travel far distances to appear for multiple government examinations.

The NRA will be conducting the Common Eligibility Test for various government sectors i.e., RRB, SSC, and Banking. We know the subjects in the prelims exam are not the same for all

three. But, NRA has announced the same syllabus for all three sectors which would be difficult for RRB as they don’t have English in their syllabus.

Students find it difficult to read and understand the topics. Hence, NRA must come with a solution to this issue. Though students can apply for other government organizations, however students interested in Railways need not read English mandatorily.

Only One Chance in a Year

Previously, students were attempting SSC, RRB, and Banking separately. If they didn’t perform well in SSC, they would prepare for RRB and appear for it. Also, if they couldn’t do well in RRB, they would appear for banking. But, now the situation is, if a student appears for NRA CET and gets less score, then he or she needs to wait for an entire year to take up the exam again. This is quite an annoying issue. Every student would put in all his/her hard work but couldn’t get good

marks and need to wait another year to score better.

Currently, the exams conducted by RRB have been delayed. More than 1 crore candidates have applied for RRB NTPC and RRB Group D which had to be concluded in 2019, however until now there is no information about the exam date.

The exam schedule has been changing. So, there is confusion in the candidate’s mind that whether they will get a refund of the fee amount paid previously or what would be the situation. There are many candidates who are waiting for the exam to be commenced.