Selection Process of Clubs and Committees at IIM Ranchi.

Clubs, Committees, Self Interest Groups (SIGs) and Independent bodies play a crucial role in any B-school. These bodies perform various functions, organize events and fests, arrange facilities for the students and interact with various stakeholders inside as well as outside the Institution. In this article, we will have a look at the Clubs/Committees /SIGs /Independent Bodies at IIM Ranchi and their selection process.

Clubs at IIM Ranchi function throughout the academic year and play a crucial role in organizing events, seminars, webinars, Fests as well as Live projects and interactions with industry experts. There are 8 clubs in IIM Ranchi. Each of the clubs have different functions and Responsibilities.

Committees too function round the year in a variety of fields for the better running of college activities. There are 7 Committees at IIM Ranchi that look after the working in various aspects of the Institution:

IIM Ranchi has 9 Self Interest Groups (SIGs) that perform various activities in and out of College. The Self Interest Groups are Groups or Teams that have formed based on variety of interests such as Dance, Music, Drama, Entertainment, Lifestyle, Quiz, Economics, Technology and many more.

The SIGs of IIM Ranchi are:

There are 6 Independent Bodies at IIM Ranchi: 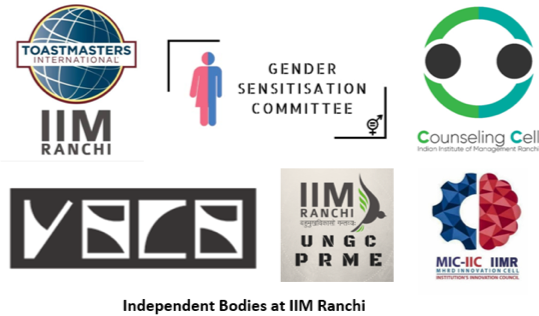 Clubs, Committees, SIGs and Independent Bodies at IIM Ranchi and most b-schools follow a rigorous selection process to find the best-suited candidates. The selection process is done to select collaborative and compatible team members who can work together for fulfilling the goals of the respective Club/ Committee/SIG/ Independent body.

The selection process is divided into the following rounds:

Clubs / Committees/ SIGs / Independent Bodies provide a significant learning experience for students pursuing an MBA. Being an active member/ Team leader in such a body helps in developing and practising a number of critical skills such as Teamwork, Leadership, Organization, Communication and Empathy. Myself being a member of Dramatics club and Toastmasters IIM Ranchi, I can be a testimony to the fact that being an active member of such a body, I have been able to improve a lot. And there is a huge potential that one can actualize by joining these bodies while pursuing an MBA at a B-school.