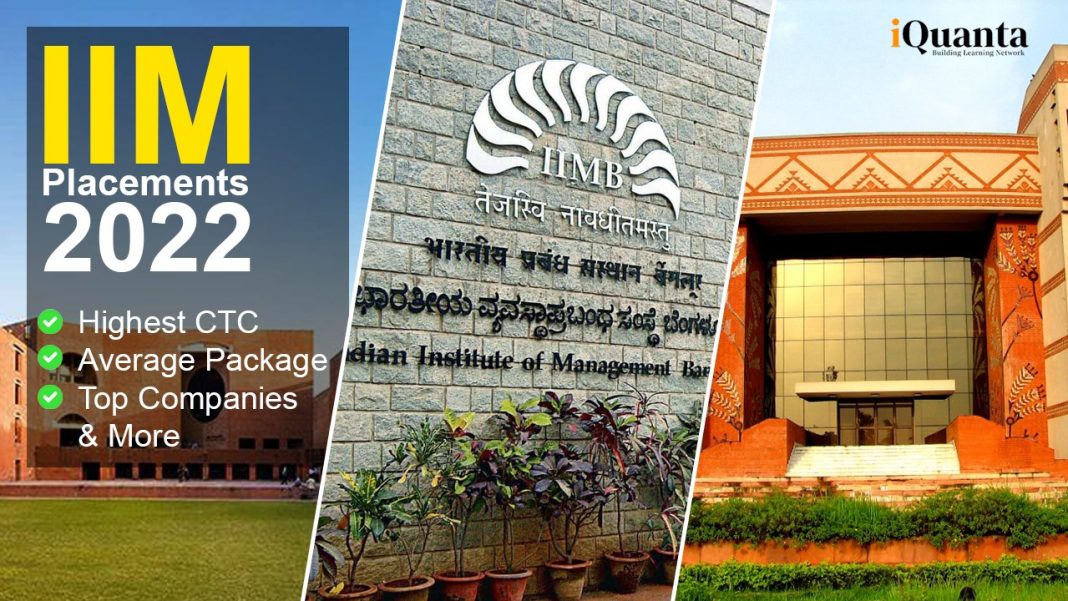 IIMs are one of the most prestigious B-schools in the nation offering the most lucrative salary packages. The IIM Placements 2022 for all the 20 IIMs of the country is provided down below.

Every year, IIM conducts placements for the MBA/PGP batch between the month of December and February, and then publish their final placements report for the departing batch between January and July. While the average CTC of the new IIMs lie between INR 10 and 20 LPA, the average CTC for the top IIMs is from INR 20 to 25 LPA. At the top IIMs, A, B, and C, the highest salary offers ranged from INR 70 lakh to INR 1 crore as CTC. Typical international compensation packages start at INR 60 lakh.

Due to the COVID-19 pandemic, the final placements processes at all campuses were kept online just like they were previous year. Final placements were conducted with a lot of enthusiasm and received positive feedback from recruiters despite the virus and the weak economy.

The PGP/MBA graduates are offered a variety of managerial positions in many industries and fields. The majority of offers are made for managerial and consultant designations. You can discover all the details on IIM placements 2022 for all 20 campuses, including IIM BLACKI in this post.

The IIM Placement Process has three types of placements:

The summer placements are planned so that companies can hire students for internships in April and May. Additionally, this creates a platform for receiving pre-placement offers (PPOs). The summer placements take place over the course of four to five days in March. A complex set of guidelines for both recruiters and students govern this procedure.

IIMs hold lateral placements, which are open to two-year MBA/PGP students with work experience of certain months depending on the colleges (e.g., 10 months at IIM Calcutta). It takes place a few months before the final placements.

With a few minor exceptions here and there, the final IIM placements 2022, which occured in February or March, is essentially the same. IIM Ahmedabad, for instance, uses a cohort-based method rather than a day-based system. Recruiters can evaluate individuals in groups based on niche or skill using the cohort-based system over a longer period of time.

Given below is a list of the highest International CTC offered at some of the IIMs. Executive MBA With Job | Challenges & How To Overcome Them

7 Reasons Why Mock Tests Are Important For CAT 2023 Preparation

Every CAT aspirant has heard about mock tests. Yet they are...
Load more