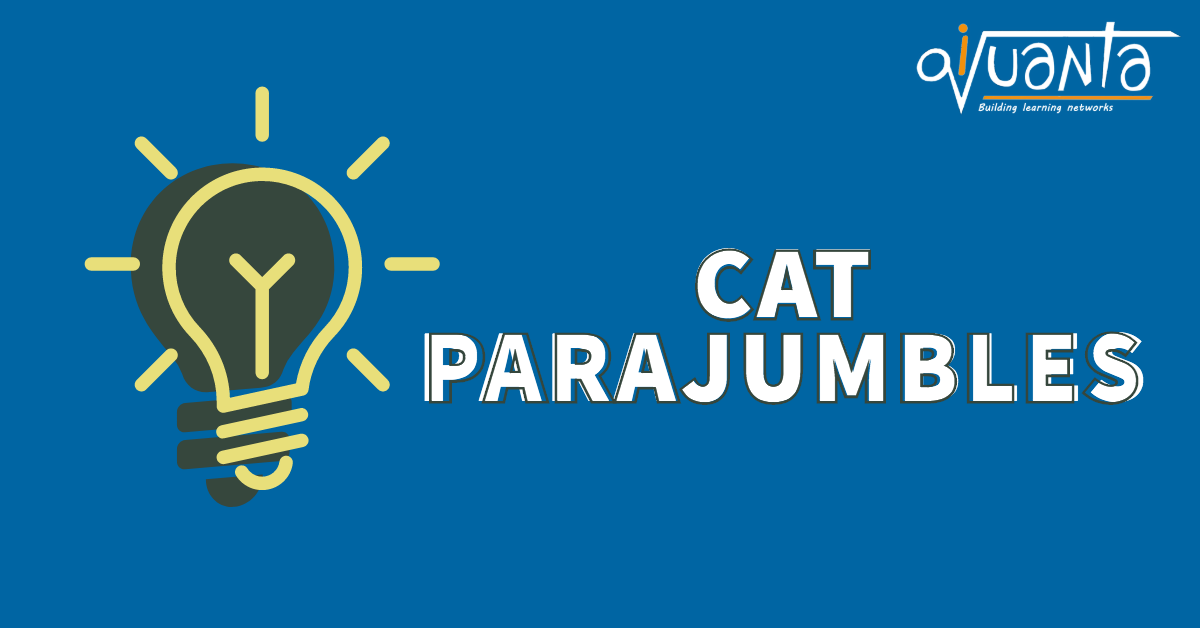 Paragraph jumble or jumbled paragraph is one of the most important question types in management entrance exams. Para jumbles test your understanding of thought flow. In simple words they test are you able to identify a coherently formed paragraphs.

In parajumbles, CAT expects you to form a COHERENT paragraph; a paragraph is coherent only when:
1. It makes complete sense
2. It is a singular unit
3. Does not start abruptly
4. Does not depend on any other sentence to make itself meaningful

Parajumbles are considered to be the most difficult section in the VARC. But they are not difficult rather puzzling. Last year, that is in CAT 2018 there were four parajumbles questions out of which two could easily be solved. The other plus point was that they had shorter sentences. And if you master the art of solving parajumbles then you will also be set for odd man out questions that are not as difficult as parajumbles and also less time consuming.

Rules to be followed

There is no theory for preparing parajumbles though grammar skills will help you out here. You need to pick up the questions and start solving. Target atleast 25-30 parajumbles in a day and within four months of rigorous practice you will end up solving 3000 parajumbles. Give an hour to this exercise if you have time and if you are working professional then half an hour will also suffice. But the link must not be broken, if you miss solving them someday and then solve double the next day.

Brush up the grammar skills.

Words like although, But, Because, etc must be carefully observed as in most of the cases they follow some other sentence i.e they can rarely be the first sentence.

Scan all the questions of parajumble and select the shortest or easiest one which varies from paper to paper.

The third most important step is to make pairs of the sentences i.e you should be able to recognize that which sentence should come after the other sentence. Even you are able to get one pair out of the question then the only task is to insert the remaining ones which is way better easy than picking the sentence one by one.

If you are able to figure out the opening sentence and one pair, Voila you are almost done and three marks are already in your pocket.

If the right answer of a given question does not have any of these, then it is no more a good question and is open to challenge.
Now, we will lay down some of the important points that the test taker must keep in mind while attempting questions on parajumbles.
a. Coherent paragraphs will never have an abrupt start; an abrupt start is the one in which there is no prior introduction of the elements with which the reader must be familiar, OR there arewords in the very first sentence that demand some additional or necessary information.
Analyze, for instance, these two paragraphs:

Let’s solve one question from last year and concentrate on the approach.

Narrowing our concentration on two sentences (1) and (3) it seems correct that these refers to unwitting enablers. So we can say that (1) and ( 3) forms a pair.

Till now we have the sequence 13

Sentence (2) looks like the correct opening sentence as it introduces the topic.

Sentence (1)states about another group that means there should be the sentence regarding one other group also that’s where sentence (4) can be inserted.

Few examples to get more insights into ParaJumbles

Paragraph 1:
Zeus was brother and consort of Hera. By Hera, Zeus sired Ares, Hebe and Hephaestus, though
some accounts say that Hera produced these offspring alone. Some also include Eileithyia and
Eris as their daughters. The conquests of Zeus among nymphs and the mythic mortal progenitors
of Hellenic dynasties are famous.

Paragraph 2:
According to Plato, a particular clan would gather on the mountain to make a sacrifice every nine years to Zeus, and a single morsel of human entrails would be intermingled with the animal&#39;s. Whoever ate the human flesh was said to turn into a wolf, and could only regain human form if he did not eat again of human flesh until the next nine-year cycle had ended.
There were games associated with the Lykaia, removed in the fourth century to the first urbanization of Arcadia, Megalopolis; there the major temple was dedicated to Zeus.

A new type of question type has also become common in exams: Odd sentence. The questions presents a jumbled paragraph and asks the CAT aspirants to choose a sentence that does not fit in the paragraph.

All these questions can be solved by following same strategies. So let us understand the strategies and solve some questions.

The questions in recent CAT Exams have presented us with mostly TYPE IN THE ANSWER format. This means that Para Jumble becomes a dicey call.

IF the language of paragraph jumble is easy-medium and the sentences are not too long, one should definitely attempt them. If the language is medium and the sentences are long then one should avoid them at all costs as (1) they will be difficult to un-jumble and (2) even if we solve them, lot of time would have been wasted. So if you are supposed to solve them, leave them for the end.

Generally the paragraph jumble will mention a noun first and then use pronouns to point at it. So we need to simply identify those sentence pair that does that

Since B mentions that Anette saw a figure. So that makes B the first statement. So that makes BD a mandatory pair. Next is D as she has recognized the figure. And in C the name of the figure is mentioned. Now read A. It says that HE was carrying his jacket.

Many a times there is a logical/ time bound event chain present in the paragraph jumble. It could be a series of events, steps etc. We can identify the beginning /start of the event and then find the next event and so on.

First sentence is C as it shows the first event in EARLY JUNE, when PeopleSoft announced its plan. Next sentence is A as FOUR DAYS LATER, ORACLE announced ITS OWN plan. B shows that the plan made PeopleSoft boss unhappy. He said something and in next sentence D added by saying MOREOVER. Then on 12th JUNE PeopleSoft turned down the offer.

Parts of speech such as conjunctions, adjectives and pronouns can also be used to identify the links between sentences.

C mentions a problem that the qwerty keyboard aimed to solve. E explains the problem in details. A mentions that to avoid THIS [i.e. Type bars often jammed]. Qwerty provided a SLOW but sure way. B tells that a faster [in comparison to QWERTY] keyboard was built. D says that YET [despite the faster keyboard designed by Dvorak] the DVORAK keyboard has not been adopted widely.

Sometimes you may find that a sentence has no previous link and introduces the idea of the paragraph jumble. Such sentence can introduce a concept, be a definition, describe an event, state an observation. In short, it will be the Obvious opener of the paragraph.

A good way to find such sentence would be to look at the first letter of the option and read only that sentence to gauge whether the sentence is an obvious opener or not.

As you can see D says SUCH tests. That means either it should define what tests or a statement prior to it should define the tests as we use SUCH when we have mentioned beforehand something about the word. Since D does not mention that, some other statement should and hence D cannot be obvious openers. C looks attractive as an obvious opener as it says the intelligence is expressed as intelligence quotient and tests are developed…. Now for one moment let us consider this option. Then what about E that also introduces an idea that intelligence can be measured by tests? Since it does not have a word such as THUS, HENCE it cannot be conclusion it can be only at the start of the paragraph or not in the paragraph at all. That means E is START of the idea. Hence E is the obvious opener.

Sentence 1 tell us about a problem that chicken are aggressive and that they are kept in darkened shed to prevent them from pecking at each other. So we know that paragraph deals with a problem and a solution. Now B continues that by explaining that in low light condition [as a result of darkened sheds] chicken are less aggressive but face health problems. So we now find a sentence that solves this problem. D gives that solution by saying that bales can work wonders [for the health problems]. Then C says that in an experiment aggressive head pecking was removed in the enriched environment [bales added to the environment]. A then explains the findings of the experiment that birds spent far more time of their time in pecking at inanimate objects [that is how aggressive head pecking was all but eliminated]. And finally 6 concludes the result of the experiment.

Chances of getting all parajumbles correct are quite low, that’s why it is suggested to not give much heed to them as compared to other parts of this section. Still, preparation must be 100%.All the best!!

Be The Master Of Paragraph Jumbles