IIM Ahmedabad is probably the most coveted B-School in the country. It is the dream college for most of the CAT aspirants. Read on to find how Kislay Jha – a student of iQuanta CAT 19 Course had one of the most grilling interview but still managed to come through with flying colours.

P1: Tell me about yourself.
A: Gave my standard introduction including academics and job profile.

P1: What products do they make?
A: Sir, they make paints…(after a lot of thinking)….and paint brushes. (I knew he was asking these questions because I’m a chemical engineer but we never studied anything about paints in engineering and I had no clue about the answer. Also, a couple of terms were coming to my mind but I kept silent since I knew I wouldn’t be able to explain those.)
(They were already smiling after my answer)

P1: Ok, tell me the difference between paints and varnish?
A: Sorry sir, I don’t know.

P1: What is a catalyst?
A: Catalyst is used to speed up a reaction or reduce the temperature of reaction without actually participating in it. (Here, I forgot to mention the point about activation energy)

P2: Give example of a catalyst in steel industry.
A: (Explained by writing the reaction)

P2: Ok, which kind of bond is present in Fe3O4? Ionic, covalent or coordinate-covalent?
A: (Took some time to think and started explaining but he wasn’t satisfied with the answer)

P1: Ok, then what is taught in Chemical engineering?
A: Sir, we study Thermodynamics, Heat Transfer, Energy Engineering etc. (Only naming the subjects I had slight confidence in.)

P1: What is entropy? Explain with formula.
A: (Gave the simple formula I sort of recalled and tried to explain the concept of Entropy using 2nd Law of Thermodynamics)

P1: I’m not understanding at all what you’re saying. Please explain in a better manner.
A: (Drew a figure and everything but they started laughing at me and said that they’re unable to understand anything.)

P2: Ok, leave entropy. Tell us about reverse osmosis.
A: (I tried explaining that how small-sized water molecule is able to go across the separating membrane towards lower concentration of water)

P1&P2: So, you’re saying it is able to pass through only because of its small size. Then what is the difference between this and filtration.
A: (Again I drew a diagram to explain. I forgot two important terms in my answer, diffusion and semi-permeable membrane. They kept making jokes about my answer and were contradicting every point I was trying to put forward.)
(At this time, I started feeling that I was ruining my interview but I tried my best to stay calm on the outside and was laughing along them on their jokes along with cracking a few myself.)

P2: Ok, let’s come to steel industry. Where is osmosis used in steel industry? (Asked and started taunting me that he won’t let go the osmosis question.)
A: (Internally, I was happy that now the questions will be about my job which I’d be in a better position to defend.) Sir, osmosis is not a part of the steel making process. But the steel plant releases a lot of effluent which need to be purified before getting discharged. We’ve a BOT plant in which osmosis is perhaps used for water purification but I’m not sure about it.
(They seemed satisfied with this answer)

P1: What are some of the problems being faced by Tata Steel and how are they solved?
A: (Talked about problems like solid waste utilisation and effects of Coronavirus on the steel market. This interview was in mid of March and situation in India was not that bad till then. Also mentioned the various steps taken by the company to tackle these problems.)

P2: No, all that is fine but I want to know what problem of Tata Steel will you solve?
A: Sir, one of the major challenges of not only the steel industry but the whole world is climate change. Being a part of the Sustainability department, my work includes analysing the environmental impacts of the products produced by Tata Steel by the process of LCA. (Talked a bit more about my job role and its impacts. They were ok with this answer too.)

P2: What about Corus acquisition? What went wrong there?
A: (Started answering but they cut me off very quickly and started arguing on the date of acquisition. Ironically, the interviewer had the date wrong. I tried to defend my answer but didn’t get drawn in the argument and put forward my points related to the acquisition. Lots of points were discussed during this answer, it isn’t possible to list them all.)

P2: Then, why IIM A, why not IIM B or C?
A: (I had already given the interviews of B, C, L and K till then and this question was asked to me for the first time at the place where I least expected it.) Sir, I only have calls from these colleges. If that day comes, when I’ve to choose between these colleges, then I’ll take my final decision.

P1: Assume you’ve converted all the colleges, then which one would you pick?
A: Sir, ever since the beginning of my preparation, I’ve dreamed of getting into IIM A. The case-based pedagogy, the amazing alumni, famous faculty members and being a part of such a talented peer group….(he cut me off here)

P2: Oh, is it so? Then I must call my friend in B and tell him that you don’t want to go there and instead want to come to A.
A: Yes sir, you can tell him. I’ve no issues.

P1: Ok, what are your hobbies?
A: I love reading novels and watching football and cricket. I also like playing badminton and football.
(Some discussion about the latest novel I had read, The Last Girl.)

P2: Ok that will be all.
(Offered me a candy while I was getting up and started joking about the Quora answers about the candy being offered or not. They asked my opinion on the topic. I told that all of this is speculation only and shouldn’t be treated by candidates as a sign of conversion or rejection.)
My thoughts on the interview: It was the toughest interview I faced. I had not expected it to be this gruelling. I’m not sure the text representation of the interview is able to convey the scene or not, but while coming out of the room, I felt that I had no chance of conversion and I couldn’t have done any worse in the interview. Thankfully, even under all the pressure put by them by laughing at me and cracking jokes at my answer, I was able to maintain my cool and tried to get out of the nervous situation by making fun of myself.

To check the complete CAT 2022 course details, visit the link below. Join fast for the limited period discount. 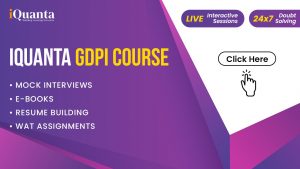