Why and How to take Mocks!! 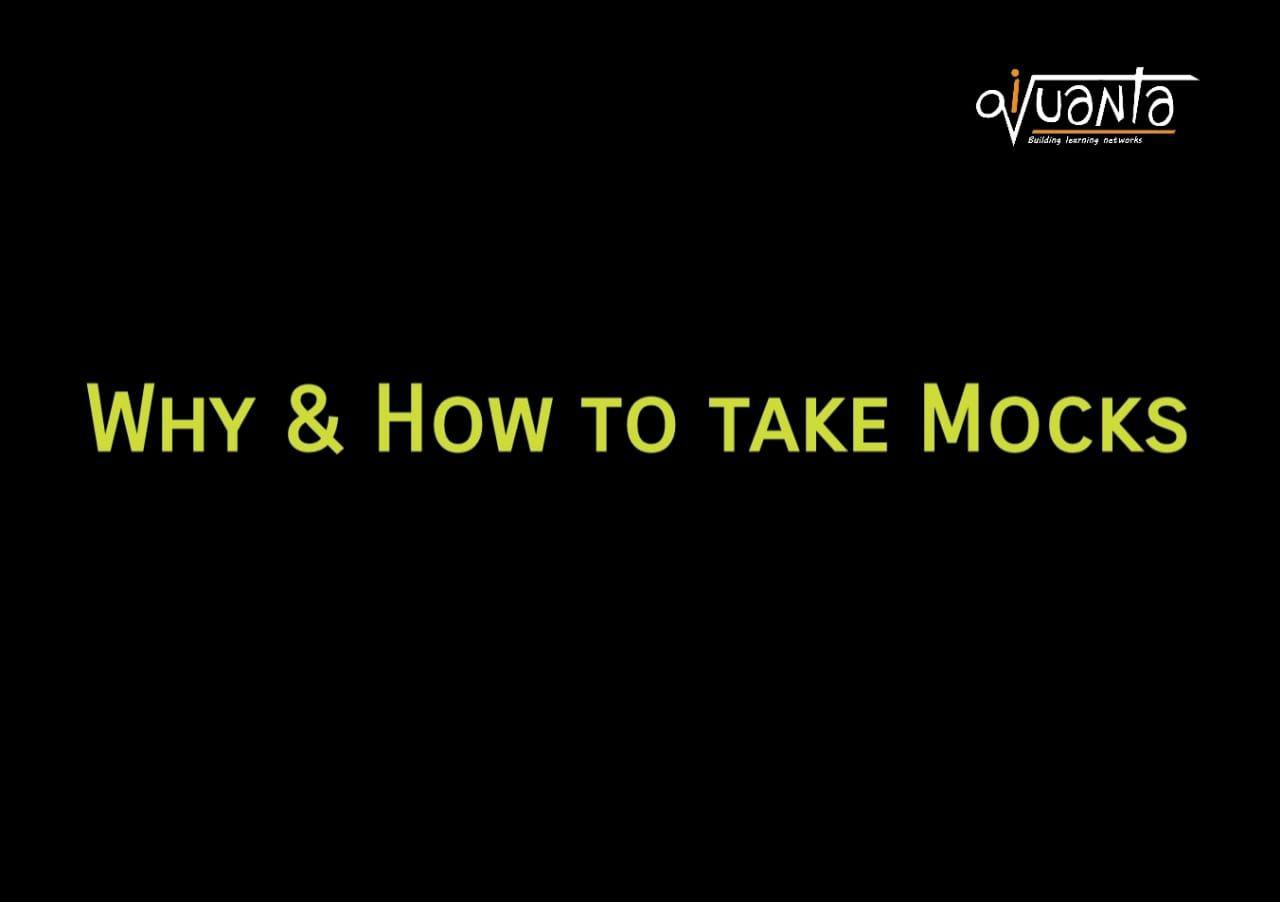 I hope everyone has started taking mocks. To those who haven’t, I would request you to start as soon as possible. No, you don’t have to wait till the completion of your basics, let alone the course. It will never be completed trust me. Mocks and learning should be a mutual process that reinforces each other. Just like a body builder doesn’t wait to lose all fat, which is not possible by the way, before start building muscle or just like a cricketer doesn’t wait for net practice to get done forever before embarking on match practice , a cat aspirant should take mocks,and try to complete the course mutually , and not separately.

Having said this, let us just understand what a mock is and what are the takeaways. Yes, it’s certainly a way to test yourself and get to know your “PERCENTILE” . But that is just a tip of the iceberg. It has much more to offer. So let me jot down the key points that we should look for in a mock.

#1  Micro analysis of strengths and weakness

It’s a platform to realize your strengths and weakness at a more micro level than we generally do by saying my quant is weak relative to verbal or even my “pnc” is strong relative to geometry. Let me explain it through an example. I would resort to my personal choice for I understand them well.
My arithmetic part is probably the strongest, however, until I realized that not all arithmetic questions are same, I was never able to score well consistently during mocks. For example, while I mostly do all questions on percentage or time and work in round 1, I might leave a circular motion question or a sway motion question between two walls for round 2 or round 3, not because I am weak at it but probably that might end up wasting my valuable time which I have realized from my mock experiences. No, I am not asking you to do the same. You might be an expert at solving circular motion and terrible at percentage. That is an individual reality and your mocks are the media to make you realize that.
Similarly, number system may not be my strongest area as a whole, but I might still be good at solving questions on remainders or pertaining to logic. I would do that in round 1,leaving questions on finding the number of numbers between a given constraint or number of triplets in a particular question for the later rounds.
The list is endless. So this is one thing I would like you all to realize – A micro analysis of your strengths and then choosing the strengths over weakness initially during mocks. Also work on the weakness separately during practice session. Don’t neglect. Sometimes you may find an easy question on your weakness and vice versa.

Let’s say I like ” PJ ” but that might not be enough to start a verbal paper with “PJ”. What if I end up wasting valuable time by over thinking on it when I take PJ at the start? What if I feel anxious about completing RCs when I start with PJ. Then I shouldn’t. As simple as that.
Or let’s say I am good at LR. That will not suffice to say that I should begin with LR. What if I fail to do the simplest DI sets towards the end due to time stress which I could have done easily at the beginning. In that case I might have to deal with the 1or 2 easy DI sets, if at all there,then moving to LR and finally coming back to DI and try doing a few odd questions here and there if possible. So sometimes “when” becomes more important in life than merely “what”. Same with mocks. So point 2 is check what works well at which instant for you.

I have heard people saying that they nearly solved an entire LR set, but just couldn’t mark. Or at times I have heard people saying that the last 4 minute was a waste as they had nothing to solve and not enough to embark on a new set. Now I would consider that a lack of farsightedness. Yes sometimes we do end up there despite all preparations but mostly we can avoid if planned. For example what if I leave a question or two from a DI SET that I know I can solve but involves some new calculations, thereby saving time for other sets and giving that extra minute to the LR that you nearly solved. On the other hand keeping a prospect of solving this question during the last 3 minutes than letting it go waste, if I end up there. So point 3 is check for yourself how you can consolidate the gaps and fine tune. Yes there are enough holes even on a perfect looking concrete. Fill them up.

#4 How seriously should I take mock percentile

Well some say, we should take it seriously, others rebut. I feel you should use it as a motivation to look forward. That’s it. But there lies the problem, isn’t it? How on earth can I get motivated by an abysmal score of 65 percentile insinuated by a 12 percentile in verbal. Well this reminds me of a mountain climber at the lowest valley. Probably he has nothing to slip down, probably he has every reason to go up, probably his road to climb up is relatively easier due to low steepness down the valley, may be he might enjoy the beauty of the mountains more compared to those at the summit amid nothing but ice sheets. So there is a bright side to being at the lowest valley , provided you are not disheartened by the narrowness of not being in the narrow summit. Exploit your low mock scores to make significant jumps, which is relatively easier compared to those scoring 95+ already, which in turn will inspire you to look farther. On the other hand what for those who are scoring 99.5 +? Well, they shouldn’t be over complaisant as well. Remember nothing lasts forever. Your probability of slipping down is statistically higher in an unprecedented way than going up or even maintaining. Remember while you are sauntering, someone else is burning the midnight oil. Try to annihilate your weakness and do better. Happiness is all about beating your best. Use your mock scores to motivate you work harder, sorry smarter!